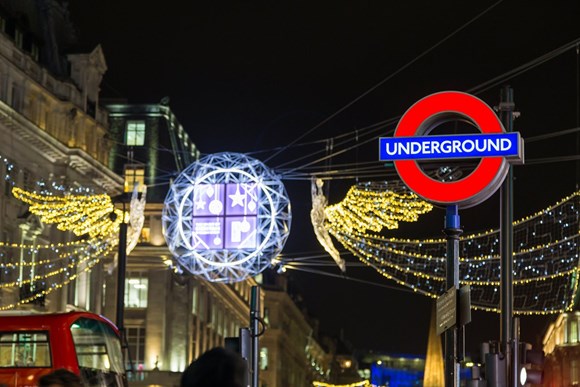 Transport for London (TfL) is encouraging Londoners to explore the city this Christmas by walking, cycling and using public transport. Public transport is open during this busy period with off-peak fares on the Tube, DLR and London Overground starting at £2.40 within Zone 1 and £1.50 in Zones 2-6. Unlimited bus and tram journeys made within one hour are also £1.50. On New Year’s Eve, there will be free travel on TfL services from 23:45 until 04:30 helping millions of people get home safely. Full details are available at tfl.gov.uk/christmas-travel.

As part of TfL’s work to encourage more people to get active during the festive period, it is giving everyone 24 hours’ free access to Santander Cycles throughout December. Santander Cycles are an easy way to get around the capital to see Christmas lights and are available to hire on Christmas Day – last year, more than 35,000 cyclists used the service on Christmas Day.  Users can simply enter the code ‘SCXMAS19’ at the terminal, online or using the app, which will give them a day’s worth of 30-minute rides for free.

Taxis and private hire services will also be available throughout the festive season, and TfL will be working with police services on Operation Safer Travel at Night. TfL’s enforcement teams will be focusing their efforts on unbooked minicabs and other illegal activity at targeted locations around London, so customers are reminded that all private hire journeys must be booked in advance.

Gareth Powell, TfL’s Managing Director for Surface Transport, said:  “Our staff will be working hard this Christmas and New Year so our customers can continue to get around the capital, whether using public transport, walking or by hiring a Santander Cycle free for 24 hours. We encourage customers to check their journeys before they travel, and to make sure they travel safely and look out for one another, while making the most of the festive period.”

TfL engineers will continue working to boost capacity and reliability on the network during the festive period, including on Christmas Day. Signalling points will be installed to facilitate the Northern Line Extension, while the signalling system that will transform the Circle, District, Hammersmith & City and Metropolitan lines will also be tested in central London. This work will involve some closures, with the Circle, District, Hammersmith & City and Metropolitan lines closed in central London on Sunday 22 and Sunday 29 December. Parts of the Northern line will be closed on Boxing Day, and there will also be closures as work takes place on London Overground and TfL Rail.

TfL will also take advantage of reduced traffic on the roads over Christmas to upgrade pedestrian crossings and create new segregated cycle lanes on Kew Bridge. The main construction work will start over the Christmas period as, on average, there is around 15 per cent less traffic on London’s streets at this time of year. From 22 December, lane closures on roads where there is construction will be in place 24 hours a day. TfL will monitor the road network during this time and make changes to its traffic signal timings based on live traffic conditions to help minimise the impact to people’s journeys.

Full details on the operation of the TfL network during the festive period are below: