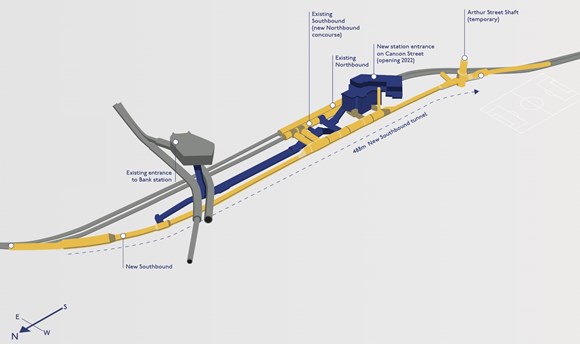 Tunnelling work at the project to modernise and expand Bank Underground station has been completed, marking a major milestone in the project.

The tunnelling, which forms part of the programme to expand the size of the station by 40 per cent, has seen more than 1.3km of tunnels constructed since May 2017.

The project to enlarge the station has involved constructing a new southbound running tunnel for the Northern line, with the existing tunnel to be converted into a passenger concourse with six new cross passages linking to the platforms on either side. Three new escalator barrels have also been excavated to link the Northern line to the DLR and to the new entrance that is being built on Cannon Street, and a new link tunnel will connect the Northern and Central lines.

Stuart Harvey, TfL’s Director of Major Projects, said: “Bank Tube station is a crucial link between many lines and is one of the busiest interchanges on the Tube network. Work restarted on site again in May and this is a huge milestone for the project. Once completed, there will be more space underground for customers to change from one line to another making journeys quicker and more comfortable for those travelling into the City.”

The tunnelling has seen more than 200,000 tonnes of material excavated from under the City of London, one of the most historic areas of the country. The work was often intricate and great care was taken to avoid disrupting any of the 31 listed buildings along the route of the new running tunnel. With space at such a premium above ground, extra space was excavated below ground to store spoil and allow workers to continue to carry out their work.

Part of the tunnelling work saw the project team cut through deep-level piled foundations of one building, which required careful excavation and the installation of a new load-support system to support the existing foundations while still allowing a tunnel to pass through them.

Once completed, the new parts of Bank Tube station will greatly increase the space available in the station and reduce journey times considerably. New moving walkways will connect customers from the Northern line to the Central line, and the new entrance will provide direct access to the Northern line.