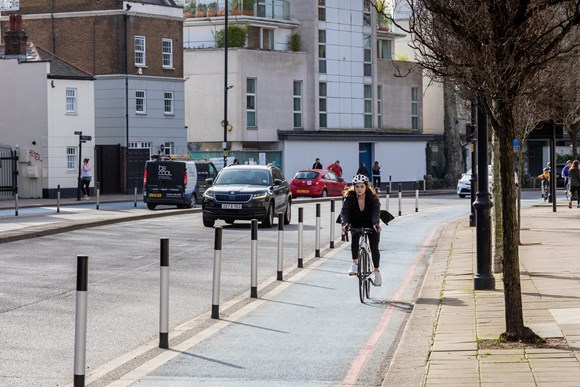 Transport for London (TfL) has started construction work on a major new 4.7km upgraded cycle route in southwest London, which will make cycling safer and easier for thousands of people travelling between Wandsworth Town Centre and Chelsea Bridge and beyond. The route is the next stage of TfL’s trial upgrades along the existing Cycle Superhighway 8 (CS8) route and will connect to a section delivered last year between Chelsea Bridge and Lambeth Bridge in central London. These changes are being delivered as part of TfL's emergency response to the coronavirus pandemic, which is giving people across the capital more space to walk and cycle safely.

Currently, there is no protected cycling infrastructure along this busy corridor, which creates a hostile and intimidating environment for people cycling and leaves them vulnerable to collisions with motor traffic. Data shows that there were collisions involving 64 people cycling between November 2016 to November 2019, of which 11 were seriously injured. The new infrastructure will give people cycling more protected space on the road and help give people confidence to cycle safely as well as provide more space on public transport for those who need it.

Work between Queen’s Circus and Wandsworth Town Centre will start on 22 February and will include:

Work to make cycling safer on Chelsea Bridge, including the widening of the existing southbound cycle lane with segregation from general traffic, is planned to begin in late March, subject to borough approval. Making sure the changes work for people living, working and travelling in the area is vital. While the trial changes are being delivered immediately as part of TfL's pandemic response, people are being invited to submit their initial feedback on the changes via TfL's website. TfL will continue to talk to local people and other stakeholders once the changes are in place and all feedback received before then will also be taken into consideration. TfL will use this feedback to help it decide whether it is necessary to make any changes to the trial scheme once it is in place, and whether it should stay in place permanently.

The work to upgrade the CS8 route south of the river will help to support essential cycle journeys from early March onwards and will also reduce pressure on National Rail services from Wandsworth Town into central London and on 30 bus routes along this corridor, as more people start to travel again when lockdown restrictions ease.

TfL analysis shows that the area is on a key strategic cycling corridor and is in the top five per cent for current and future cycling demand in London. Upgrading cycle infrastructure along CS8 will help to maximise the role played by London's existing cycle network in supporting those who need to travel, including other cycle routes in and around Wandsworth.

Will Norman, London's Walking and Cycling Commissioner, said: “Londoners have shown a record-breaking demand for cycling over the past few months and I'm delighted that our bold new measures build on that momentum and ensure we're doing all we can to avoid a damaging car-based recovery.

“Enabling more people to walk and cycle is key to a green recovery for our city, and the Mayor’s world-leading improvements to London’s streets are enabling millions of journeys to be made by walking and cycling.”

Helen Cansick, TfL's Head of Healthy Streets Delivery, said: “Cycling has been an essential mode of transport for many people throughout the pandemic and we anticipate increasing numbers of people will want to cycle and walk in the area, as coronavirus restrictions begin to ease. We’re working to deliver more infrastructure across the capital to support these journeys and our work to upgrade sections of CS8 will help to make cycling easier and safer for thousands of people, as well as ensuring that there is enough space on public transport for those who need it most.”

TfL has recently set out plans to make a series of trial changes to Tooley Street and Duke Street Hill in central London, which will extend the new Cycleway 4 route to enable safer essential journeys between London Bridge, Rotherhithe and beyond. This followed the recent start of construction of a further trial extension to the route in southeast London, between Angerstein Roundabout and Charlton. TfL has also set out plans to provide improvements for people cycling on Mansell Street in central London, connecting between Cycleway 2 at Aldgate and Cycleway 3 at Tower Hill.

TfL has also set out plans for further trial walking and cycling schemes in southwest London, including improvements on the A23 between Streatham and Oval and an upgrade of the CS7 route between Oval and Elephant & Castle.