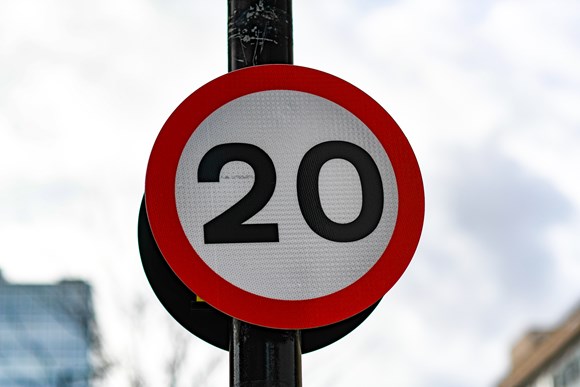 Transport for London (TfL) has set out the next stage of its plans to make its roads in Westminster safer, which would see speed limits on almost all TfL roads in the borough reduced to 20mph. Reducing speed limits can make a real difference to cutting road danger and enabling more people to walk and cycle, with 59 per cent of people in an earlier consultation stating that reduced speed limits would encourage more cycling.

In March 2020, TfL introduced a 20mph speed limit on all of its roads within the central London congestion charging zone as part of its Vision Zero commitment to eliminate death and serious injury on London’s roads. This included a new 20mph limit on Victoria Embankment and along the Millbank. A 30mph speed limit was also introduced on the A40 Westway within the borough in June last year, which is proposed to be implemented permanently. Data shows if you are hit by car at 20mph you are five times less likely to be fatally injured than at 30mph. TfL is asking people to have their say on the proposed changes. People will be able to share their views on how the proposals might change the way people travel through a survey that is available on the TfL website at tfl.gov.uk/speed-westminster. It also seeks views on making the temporary 30mph limit on the A40 Westway and temporary 20mph limits on Park Lane northbound and Grosvenor Road permanent. The survey will be open until the 18 August and all responses and feedback will be carefully considered. Subject to feedback, the planned changes could be introduced in spring 2022.

In 2020, Westminster Council introduced a 20mph speed limit on all its roads in the borough as part of their commitment to making streets in Westminster safer. The Mayor and TfL have committed to eliminate death and serious injury from London’s transport network as part of their Vision Zero Action Plan, which includes a commitment to reduce speed limits on roads in London. Collision data from around the world shows that the speed at which people are driving or riding is the single most important determinant of both the likelihood of a collision occurring and the severity of the outcome. The faster a person is driving, the less time they have to react to avoid a collision, and the more severe any resulting injuries will be. Speed is a factor in around 37 per cent of collisions in London where a person dies or is seriously injured and TfL will continue to work closely with the police, local councils and other partners to tackle the devastating impact these collisions can have on local communities.

Will Norman, London’s Walking and Cycling Commissioner, said: “Making London’s streets safer for people walking and cycling is one of TfL’s top priorities, and 20mph speed limits significantly reduce road danger. The introduction of lower speed limits on the remainder of TfL roads across Westminster includes some major thoroughfares, and will make a real difference alongside additional safety improvements. I encourage everyone to have their say in this consultation and play their part in improving the road network.”

Penny Rees, TfL Head of Healthy Streets Delivery, said: “Millions of walking and cycling journeys are made across London every day and a person is five times less likely to be fatally injured if hit at 20mph than at 30mph. That’s why we’ve committed to reducing speed limits on our road network in the capital and these proposals could make a real difference in cutting road danger and enabling more people to walk and cycle. We really value people’s feedback on our proposals and I’d encourage everybody to use this opportunity to have their say on our plans.”

Councillor Melvyn Caplan, Deputy Leader and Cabinet Member for City Management at Westminster City Council, said: “Westminster City Council is committed to making our streets safer, cleaner and healthier for everyone, which is why we introduced a 20mph limit on Westminster's roads last year. We are therefore pleased that TfL have shared their plans to introduce a 20mph limit on their roads in Westminster, along with other measures to increase public safety. Slowing down traffic speed reduces the severity of collisions and makes it safer for people to walk and cycle in the city. I encourage our residents to have their say and respond to the consultation by 18 August.”

Jeremy Leach, London Campaign Co-ordinator for 20's Plenty for Us, said: “Between 2015 and 2019 almost 300 people have been killed or seriously injured on TfL’s roads in Westminster, the vast majority of these were people walking or cycling. 20mph speed limits coupled with new measures to help drivers stick to the limit will have a huge impact on the numbers of people injured on these roads and ensure that people are kept safe when using some of London and the UK’s most iconic streets and roads.”

TfL continues to work on a number of major programmes to make London’s roads and the vehicles using them safer. TfL’s world-first Direct Vision Standard, which reduces lethal blind spots on lorries, is already helping to save lives and prevent life-changing injuries. The scheme requires owners of Heavy Good Vehicles (HGVs) weighing more than 12 tonnes to apply for a free permit that assigns vehicles a star rating based on how much the driver can see directly through their cab windows in order to be able to drive in London. Since its introduction, more than 70,000 HGVs have had safe systems fitted, improving protection for people walking, cycling or riding e-scooters or motorcycles and saving lives.

In addition to the record-breaking growth seen in London’s cycle network over the past five years, with 260km of safer, high-quality cycle routes delivered by TfL and the boroughs, TfL has continued to work on its Safer Junctions programme to make life-saving changes at some of the capital’s most dangerous and intimidating junctions. To date, TfL has completed work at a total of 42 junctions, with construction expected to start on more schemes later this year, including Battersea Bridge/Cheyne Walk, York Road roundabout and Holloway Road/Drayton Park.

TfL’s proposals are available on the TfL website at: https://tfl.gov.uk/speed-westminster