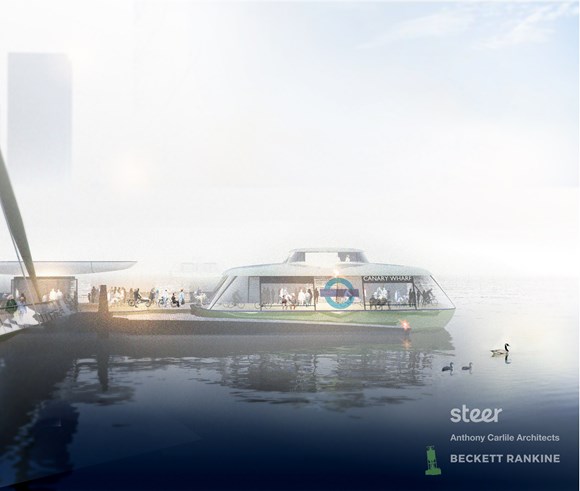 The first artist impression of what a new proposed ferry between Rotherhithe and Canary Wharf could look like has been revealed by Transport for London (TfL).

The new service, which would provide a ‘turn up and go’ crossing across the Thames, would play a significant role in encouraging more walking and cycling across London. It would link directly into wider walking and cycling routes across the area, including the Thames Path and the proposed Rotherhithe Cycleway along Lower Road and Rotherhithe Street, and new cycle routes between Hackney and the Isle of Dogs.

Since making the decision in July 2019 to no longer progress a walking and cycling bridge between Rotherhithe and Canary Wharf due to costs and affordability, TfL has been carrying out further work to develop a more affordable proposal for a ferry crossing. This work has focused on route planning, vessels, piers and connectivity to the local area and builds on initial feasibility work carried out ahead of the first public consultation on a crossing in November 2018, which demonstrated significant public support for an improved crossing at this location.

TfL now proposes a clean, fast ferry service with new specially designed boats and piers which will be as environmentally friendly as practicable. These would be fully accessible for people with reduced mobility as well as provide adequate space for standard and adapted cycles and cargo-bikes.

To support the next stage of design work, TfL has now appointed the consultant Steer to assess different operating models on how TfL would run the service, including whether sponsorship and subsidy of the service could be used to make it free to customers. The design work is also assessing suitable models for construction so that work can commence as quickly as possible in the future. A second public consultation, seeking feedback on the final design options for the piers, ferries and how it will connect with the local area will be carried out later this summer.

Heidi Alexander, Deputy Mayor for Transport said: “We are absolutely committed to improving cross-river connectivity for cyclists and pedestrians, particularly in east London where there is a pressing need. This new rapid ferry service between Rotherhithe and Canary Wharf would make it even easier for Londoners to get around the capital by bike or on foot and would bring a boost to businesses in the area. It’s exciting to see these plans starting to take shape and I look forward to seeing more detailed proposals later in the year.”

Alexandra Batey, Director of Investment Delivery Planning at TfL said: “Improving connectivity across the Thames is vital to encourage more people to consider walking and cycling to work or for leisure as well as to support the local economy. This new clean ferry service would help link new proposed cycle routes in the area and provide a new level of river crossing accessibility. We look forward to sharing the detailed proposals with the public later this summer.”

Rachel Lee, Policy and Research Manager for Living Streets the charity for everyday walking said: “Any project that helps promote and elevate walking and cycling networks gets a thumbs up from us. More walking and cycling for everyday journeys is vital for our capital. It will help in the battle to cut toxic air pollution levels and heavy congestion and denotes healthier lifestyles.”

Isabelle Clement, Director of Disability Cycling charity Wheels for Wellbeing said: “Wheels for Wellbeing is pleased to see that from the outset, a commitment to is being made about accessibility of the new ferry service to users of adaptive cycles, as well as cargo cycles etc.

“We need a ferry solution that is truly accessible, whatever the level of the river, including to people who cannot dismount and push their cycles and those who ride wider/longer/heavier cycles than simple bicycles. We will be keen to help TfL and its appointed consultant to consult and involve disabled people who cycle throughout the development and implementation phase.”

Mike Goggin, UK Managing Director of Steer Group said: “Steer is delighted to be working on this project in partnership with TfL and with our team of experts to promote improved cross-river walking and cycling accessibility between Rotherhithe and Canary Wharf.”

TfL is working with the boroughs to deliver walking and cycling improvements across London, transforming streets into safer places and encouraging more sustainable travel throughout Southwark and Tower Hamlets. New cycle routes are either under construction or in development, including Cycleway 4 which will link Tower Bridge to Greenwich via Rotherhithe and major new routes between Hackney and the Isle of Dogs. London’s cycle hire scheme, Santander Cycles, is also set to be expanded along Cycleway 4 between Tooley Street and Canada Water station, making it even easier for people to start cycling in south east London and will be the first time that the scheme has reached Bermondsey and Rotherhithe.

TfL is also considering where further new docking stations could be added to existing and new cycle routes in the area, including those planned to link into the new pier at Rotherhithe. Developer contributions towards the expansion of the cycle hire network in this part of Southwark are currently being secured, which would enable docking stations to be delivered in the future to serve new residents and people working or visiting the area as well as the existing communities.