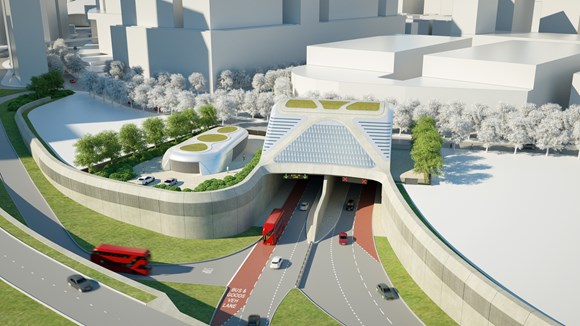 Transport for London (TfL) has completed the contract for the Riverlinx consortium, comprising of Aberdeen Standard Investments, BAM PPP PGGM, Cintra, Macquarie Capital and SK E&C, to build the Silvertown Tunnel – a new river crossing under the Thames in east London.

In May 2018, following a six-month public enquiry, the Department for Transport granted the Silvertown Tunnel project a Development Consent Order (DCO). This is the formal process by which the Government gives approval of a development categorised as a Nationally Significant Infrastructure Project (NSIP).

Following a competitive procurement process, the consortium have been awarded a Design, Build, Finance and Maintain contract for the construction and maintenance of the tunnel, which is set to be open in 2025. Payments from TfL to the consortium will only start once the tunnel is open and available for use. TfL will also be able to reduce payments should the tunnel not meet certain key standards, such as availability for use by traffic and physical condition.

Once the Silvertown Tunnel opens, vehicles will be required to pay a user charge for using either the Blackwall or the Silvertown Tunnel. This user charge, which will be used to pay for the construction and maintenance of the tunnel, is a legal requirement as part of the planning approvals and therefore will need to be implemented when the tunnel opens. Any surplus from the revenue generated via the user charge will be reinvested into public transport across London. The exact charge levels for various types of vehicles using the tunnel will be decided closer to the opening date. The planned user charge at both the new tunnel and the existing Blackwall tunnel will ensure overall traffic volumes and associated carbon emissions do not increase. At locations where TfL’s air quality modelling showed that there may be a small localised impact, mitigation will be delivered further to ensure any increase is minimised. Both tunnels and the surrounding area will also fall within the Ultra Low Emission Zone from October 2021. In line with the commitments enshrined in the DCO, TfL will also undertake further modelling, monitoring and, if required, appropriate mitigation of the effects of the scheme to ensure the outcomes are not materially worse than we forecast in our Environmental Statement.

Stuart Harvey, Director of Major Projects at Transport for London said: “Following detailed discussions, we have now completed the contract for the Riverlinx consortium to design, build, finance and maintain the Silvertown Tunnel. Once open in 2025, the tunnel will provide new cross-river bus routes in east London and during its construction we will work tirelessly to ensure that any disruption to local residents or businesses is kept to an absolute minimum.”

During construction, both the consortium and TfL are committed to ensuring that the majority of construction material is transported by river, that all on-site construction machinery meets the Mayor’s Non-Road Mobile Machinery Low Emission Zone Standards, and that any vehicles working on the scheme are Euro VI and comply with the Mayor’s Direct Vision Standard. TfL is also legally committed, as part of the wider DCO process, to deliver a wide range of improvements and measures to reduce the impact of the new tunnel and support the wider local area. These include:

The tunnel will also improve cross-river public transport connections, with around 37 buses an hour during peak periods in each direction using the tunnel, including the current six single-decker buses per hour which run through the Blackwall Tunnel. All of the new double-decker buses that use the Silvertown Tunnel are expected to be zero-emission from launch. These routes will link places such as Stratford and Canary Wharf to Eltham, Grove Park and Charlton, unlocking new journey options and supporting wider regeneration across the Greenwich Peninsula and Royal Docks.

The project will also deliver a range of improvements in the areas around the tunnel on both sides of the river, including additional noise barriers along the approach roads and new green spaces around the tunnel entrances which will deliver a net increase in biodiversity throughout the area. Walking and cycling upgrades will also be delivered in close consultation with local residents and active travel campaigners.

o Developing an extensive Community Engagement Plan, describing how it will keep the local community informed prior to and throughout the works;

o Creating local apprenticeships, job starts and educational opportunities throughout the length of the construction;

o A target to have at least 25 per cent of the construction team working on the crossing recruited locally.