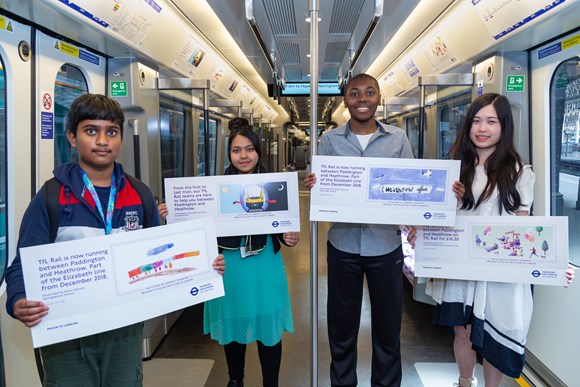 Creative students living and studying along the Elizabeth line route have had their work installed across Transport for London’s (TfL) fleet of state-of-the-art new trains, which are now running on TfL Rail from Paddington station.

The artistic young Londoners have had their winning entries made into train and station posters after submitting their creative designs to TfL as part of a competition.

Five eye-catching new designs were selected for the TfL Rail network in the west, which will become part of the Elizabeth line in December.

They have been designed by:

One of the key criteria for the students was to present the benefits of the new TfL Rail services between Paddington and Heathrow Airport, which will become part of the Elizabeth line from December. The winning designs showcase a variety of improvements including that stations are now staffed from first to last train and that customers can travel along the route using Oyster and contactless payment. Their creative work also highlights that pay as you go fares on TfL Rail are in line with, or cheaper than previous Heathrow Connect fares.

Chris Macleod, TfL’s Customer Director, said: “It’s been great to be able to exhibit these brilliant works of art in the new Elizabeth line trains running on TfL Rail from Paddington station. These young Londoners are the future of our city and we are glad to share their original poster designs with thousands of people living and working in west London.

“I hope that Aaron, Rene, Anjuma, Ellie and Eve will enjoy seeing their inspirational design work on TfL Rail ahead of the launch of the Elizabeth line in December.”

The new world-class railway, jointly sponsored by the Department for Transport (DfT) and TfL along with vital support and financial contributions from London’s business community, will redefine the way that Londoners and visitors travel across the city. When the Crossrail project is fully complete in December 2019, the Elizabeth line will carry over 200 million passengers a year adding 10 per cent to central London’s rail capacity.

These new trains are initially running from Paddington to Hayes & Harlington and are 160 metres long, made up of seven spacious carriages. They will later be extended to nine carriages and the full length of 200 metres to carry up to 1,500 people at a time.

In December, when Elizabeth line services open through central London, the campaign will continue with creative students along the route again invited to submit their designs. The winning artwork will celebrate the opening of TfL’s new railway and the benefits for the future of London.

The Elizabeth line will fully open, with services running from Reading and Heathrow in the west through the central tunnels to Shenfield and Abbey Wood in the east.