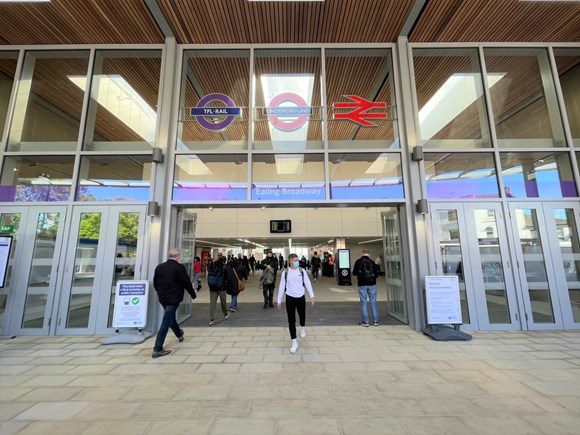 The new ticket hall at Ealing Broadway station opened for customers today with new lifts enabling step-free journeys on TfL Rail, London Underground (District and Central lines) and Great Western Railway. The station is staffed at all times while trains are running with ramps available for those that need them to board trains.

As the latest station to reach this milestone ahead of the Elizabeth line opening, Ealing Broadway has undergone a significant transformation by Network Rail to build a large new ticket hall with more space for customers. A glass frontage makes the entrance brighter with a longer gateline replacing the cramped entrance previously used to enter and leave the station.

The extended platforms are capable of accommodating the longer Elizabeth line trains, which are more than 200 metres in length. The station also benefits from improved lighting, signage and customer information screens providing a better customer experience.

Ealing Broadway, which originally opened in 1879, is also served by the District and Central lines on the London Underground. The new lifts enable step-free journeys, improving accessibility for those needing to travel to stations between Paddington, Heathrow and Reading. Staff are on hand to assist anyone needing a manual boarding ramp to get on or off the Central line, TfL Rail or Great Western Railway trains at the platforms, and all London Underground and TfL Rail stations operate a turn-up-and-go service for customers needing assistance. Works at Southall, Hayes & Harlington and West Drayton stations are also continuing and are due to complete later this year, all with bright new, expanded ticket halls opening, which will provide more space for customers.

Work around the station to improve the local environment and public realm is being carried out by the London Borough of Ealing and will continue until spring 2022, delivering improvements to the public realm such as the roads, pavements and pedestrian areas to complement the station works.

Rail Minister Chris Heaton-Harris, said: “I’m pleased that upgrades to Ealing Broadway, a crucial interchange station on the rail network, have been completed. This is a Victorian station transformed for modern passengers ahead of the Elizabeth line opening.”

Heidi Alexander, Deputy Mayor for Transport, said: “I’m really pleased that Ealing Broadway station now has step-free access as this will make a huge difference to people with mobility needs and the wider public. Together with the ongoing station improvements and the opening of the Elizabeth line in the first half of next year, transport in this part of West London is set to be transformed.”

Andy Lord, Managing Director of London Underground, said: “Ealing Broadway is a crucial interchange on the TfL network for TfL Rail, London Underground and Great Western Railway customers. These improvements bring the Victorian station up to modern standards whilst enabling customers to make step-free journeys. The station is now equipped for future Elizabeth line services and more pleasant for those using the transport network now.”

Tim Ball, Elizabeth line director at Network Rail said: “With our upgrades of Acton Main Line and West Ealing already completed this year it is great news for passengers that Ealing Broadway has now been transformed too. This busy station now has the modern facilities it needs and, while we still have some work to complete behind the scenes, we were determined, along with our industry colleagues, to give passengers the benefit of step-free access as early as possible.”

Councillor Deirdre Costigan, deputy leader and member for climate action said: “An improved Ealing Broadway station is great news for residents and commuters - particularly as we continue to recover and respond to the pandemic and some people may be beginning to use public transport a bit more.

“We will continue to work alongside our partners TfL and Network Rail to improve and enhance local transport facilities across the borough as we move towards the lifting of COVID-19 restrictions in the coming months.”

John Deery, Project Manager within GRAHAM’s Civil Engineering division, said: “It is fantastic to see the completion of phase one of our work at Ealing Broadway station. We have worked to ensure the upgrades remain sympathetic to the station’s original features, while providing modern ticketing facilities, customer information and step-free access. Londoners and visitors alike will benefit from these facilities if they are using TfL Rail, London Underground and Great Western Railway services.” As part of the new station building, three new retail units are being constructed. These will be leased out by TfL later this year as part of its ongoing in-station retail strategy, with all revenue reinvested into public transport improvements.