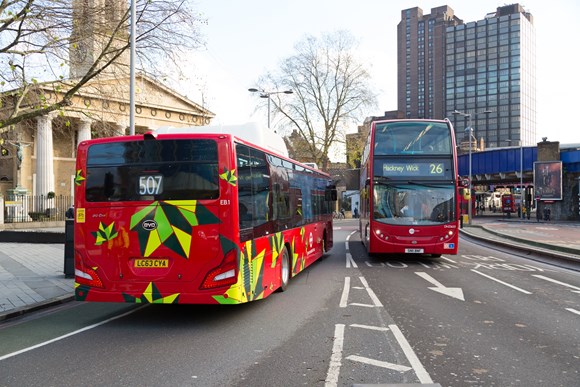 Transport for London (TfL) is encouraging Londoners and visitors to the capital to make the most of the Bank Holiday weekend by planning their journeys in advance from Friday 30 March until Monday 2 April 2018 to check for planned work and service changes on some parts of the transport network.

There is no better way to explore London over the Bank Holiday weekend than by public transport, with off-peak fares, the Hopper fare, which provides unlimited bus and tram journeys in one hour for the price of one, as well as daily fare capping and convenient payment with Oyster or contactless. London Buses will continue to run throughout the Easter Bank Holiday weekend, with amended timetables on Friday and Monday.

The majority of TfL services will be running as usual throughout the Easter Bank Holiday providing ways to get around London, however engineers will be working across the traditionally quieter period to carry out essential improvement work on tracks, signalling and roads at some locations.

This work includes testing for the huge modernisation of the Circle, District, Hammersmith & City and Metropolitan lines, which will transform the oldest parts of the Tube network into one of the most modern railways in the world. The upgrade programme will increase capacity by 33 per cent across the four lines, making journeys quicker and more reliable.

Vital work will also continue on the TfL Rail route, preparing for Elizabeth line services that will transform travel with quicker, easier and more accessible journeys across the capital when the line opens from December.

Where work is taking place, alternative travel options will be available. Full details of the work and Easter travel advice can be found on TfL's website at tfl.gov.uk/easter-travel or by searching ‘TfL Easter travel’ online. From Friday 30 March to Monday 2 April 2018, planned work is expected to affect Tube and rail services. Key closures during this period include:

Due to Network Rail track and infrastructure work, some London Overground services will be suspended between:

On the London Trams network, some services will be suspended from Friday 30 March until Sunday 8 April due to essential track upgrade work. There will be no service between:

Some roads in central London will be affected by the City of Westminster’s work to return Baker Street to two-way traffic to provide a safer and more welcoming environment. TfL is working closely with Westminster to minimise the impact of this work but road users are advised to plan ahead and leave more time for their journeys.

TfL will be using the Easter Bank Holiday weekend to reduce the long-term impact of roadworks on Farringdon Road – by consolidating a month’s worth of roadworks into just four days. TfL has actively encouraged utility companies to carry out essential maintenance and repairs alongside our team constructing Cycle Superhighway 6 that would otherwise have required separate road closures over the coming months.

Mark Wild, Managing Director of London Underground, said: "We want everyone to be able to make the most of their Bank Holiday weekend, and most of our services will operate as usual. However, there are some exceptions where we need to use the quieter period to carry out work which is vital to the modernisation of the Tube and rail network and for preparations ahead of opening the Elizabeth line in December.

“I would encourage customers planning to travel during this period to visit our website, where they can find the full detail of the work, closures and the alternative transport options that are available to help them get around.”

A full list of TfL's social media channels is also available at tfl.gov.uk/travel-information/social-media-and-email-updates/, which includes details of the Twitter feeds for each of the 11 different London Underground lines, buses, the DLR, London Overground, TfL Rail, Santander Cycles, Emirates Air Line and live traffic news for updates during the Easter period.