TfL Press Release - Number of people killed on London’s roads in 2021 fell to the lowest level on record, but collisions have increased as lockdowns ended 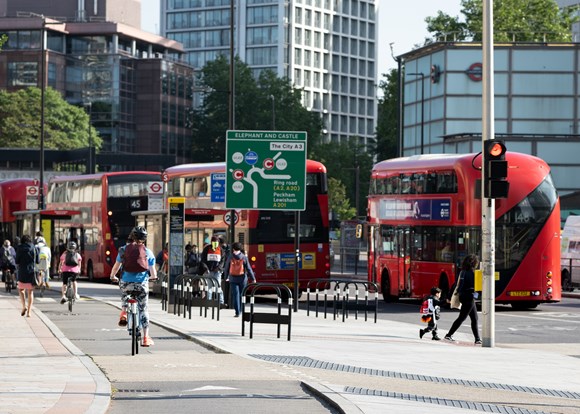 Transport for London (TfL) has published casualty statistics that show the number of people tragically killed on London’s roads in 2021 fell by 22 per cent to the lowest level on record, compared to a seven per cent increase nationally. Despite this decrease, overall casualties have increased since the coronavirus lockdowns ended and traffic has returned, and continued action is needed to achieve the Mayor’s Vision Zero goal of eliminating death and serious injury from the transport network.

Whilst travel habits continued to change in 2021, the lifting of most pandemic restrictions in July 2021 saw a gradual return to normal activity. As traffic returned to pre-pandemic levels, the number of people who were killed or seriously injured increased by 17 per cent, rising from 3,070 in 2020 to 3,580 in 2021.

The devastating consequences for the families, friends and communities impacted by these deaths and life-changing injuries is immense and collective action is needed to achieve the Mayor's Vision Zero goal of eliminating death and serious injury from London’s streets by 2041. This week is Vision Zero week, with TfL, the Metropolitan Police, London boroughs and the Mayor working together to highlight the problem of road danger and the trauma caused by collisions, and generate awareness of Vision Zero across all Londoners.

Vulnerable road users continue to be most at risk with people walking, cycling and motorcycling making up 81 per cent of all people killed or seriously injured in 2021. The number of people killed while cycling in 2021 was down by 40 per cent on the 2005-09 baseline, from 17 to 10 people. However, serious injuries to people cycling increased by 54 per cent. This partly reflects increases in the number of journeys cycled, with the most recent figures showing the share of road journeys by bicycle almost doubling to four per cent.

Since the start of the pandemic, TfL has worked closely with boroughs across the capital to invest in the walking and cycling infrastructure needed to enable increases in active travel and keep people walking and cycling safe. This includes more than 100km of new or upgraded cycle lanes, 89 Low Traffic Neighbourhoods, and 322 ‘School Streets’. By autumn 2021, 19.4 per cent of Londoners lived within 400 metres of a cycle route, an increase of approximately 750,000 residents since 2019.

People riding motorcycles continued to be disproportionately involved in collisions resulting in fatal and serious injuries to themselves and to others, especially people walking. In 2021, motorcyclists accounted for less than three per cent of vehicle kilometres travelled but 19 per cent of fatalities. The greatest absolute increase in serious injuries was recorded amongst motorcyclists, notably smaller capacity motorcycles of 125cc or below. The pivot to online shopping and the growth of the food delivery economy has contributed to an increase in new small motorcycle registrations, with more people riding for work. TfL has been working closely with delivery, courier and servicing companies to drive down these devastating incidents and help ensure riders watch out for each other and everyone else on London’s streets.

Cars continued to be the main vehicle type involved in collisions in 2021, highlighting the risks posed to Londoners and the capital by a car-led recovery from the pandemic. Cars were involved in 64 per cent of all collisions resulting in death or injury, up from 62 per cent in 2019. Speeding remains the biggest risk to road users with half of the 2021 fatal collisions in London (37 out of 75) reporting speed as a contributory factor. TfL has been working with the Met to increase the level of police enforcement and tackle speeding and the harm it causes, with the aim of having the capacity to enforce up to one million speeding offences by 2024/25. In 2021/2022, the Met enforced 476,685 speeding offences, 199,105 more than in the previous year and an increase of 72 per cent.

A shift away from private vehicles to walking, cycling and public transport will significantly help to reduce Londoners’ exposure to road danger and get the city closer to its Vision Zero goal, while also helping to reduce congestion and carbon emissions, and improve London’s air quality. Creating safer and more attractive areas for people to live, work and play will also encourage more people out of their cars to walk, cycle and use public transport, and enjoy the health benefits of active travel.

The number of people killed or seriously injured in or by a bus in 2021 was the second lowest number on record after 2020 and is 70 per cent down on the 2005-09 baseline, meeting the overall target of 70 per cent by 2022. TfL has continued work on its Bus Safety Programme and all new buses joining the fleet are now Bus Safety Standard 2019 compliant. This means they are fitted with Intelligent Speed Assistance, which ensures that buses are complying with the speed limit. They are also fitted with blind spot mirrors or camera monitoring systems to improve visibility of vulnerable road users and with acoustic vehicle alerting systems to alert road users of their presence. TfL is continuing the roll out of the Bus Safety Standard on new vehicles, with all existing measures mandated by 2024. “The pandemic has also demonstrated that fewer cars on our roads mean fewer deaths and serious injuries, which is why I’m determined to make sure we deliver a green recovery in London by encouraging more Londoners to walk and cycle.

“The cost to the capital of a car-led recovery cannot be underestimated, with increased road danger, detrimental health impacts, time wasted stuck in traffic and billions lost to the economy. There is still much more to do to eradicate road deaths and serious injuries from our streets, but I am determined that together we will help make London greener, more sustainable and safer for all.”

Commander Kyle Gordon, Metropolitan Police Service said: “The Met’s Roads and Transport Policing Command, in partnership with TfL, is working tirelessly to protect our communities from harm by reducing collisions and the number of people killed or injured on London’s roads. Every life lost on London’s road network is a tragedy and only reinforces our resolve to achieve the Mayor of London’s Vision Zero of eliminating death and serious injury.

“As an organisation we are fully committed to road safety and have the largest and busiest Roads Policing function of any UK police service. Every day, roads policing officers are taking action to influence road user behaviour through engagement and education, and where necessary through robust enforcement. We continue to remind all road users, including the most vulnerable, namely pedestrians, cyclists and motorcyclists, of the importance of keeping themselves and others safe while on our roads and streets.

“Everyone has a responsibility for looking after each other on our roads and it is essential that everyone thinks carefully about each and every journey and ensures they take every step they can to keep themselves and others safe."

Stuart Reid, Head of Insights and Direction for TfL, said: “Although last year saw the lowest number of road deaths in London on record, the latest casualty stats show that it is more important than ever to double down on our Vision Zero goal of eliminating deaths and serious injury from London’s roads. Protecting everyone on the road, particularly people walking, cycling and motorcycling, is a priority for us and our partners and we will continue to incorporate our Vision Zero strategy into every decision we make. Without safe streets we know that people won’t choose the most healthy and sustainable modes of transport. Vision Zero is an essential part of building a better London for everyone.”

“We’re also calling on everyone across London to continue to look out for each other on the roads, as safe behaviours can save countless lives and prevent families, friends and entire communities of people from experiencing unnecessary suffering.”

Nick Simmons, RoadPeace CEO, said: "Our members are only too aware of how road crashes change lives. Whilst there is some encouragement to be taken from the fact that deaths are falling, vulnerable road users continue to be most at risk and casualties have increased so RoadPeace strongly support Vision Zero week and will work with TfL, the Metropolitan Police and everyone else involved to highlight road trauma and raise awareness of Vison Zero.”

Jeremy Leach, Action Vision Zero Co-Founder, said: “It has been good to see the decrease in the numbers of road deaths in London but the rise in serious injuries is a real concern. Having lots of traffic is a huge source of road danger on London’s roads and we will struggle to get people out of their cars and choosing to walk and cycling if they are at risk of serious injury particularly from speeding vehicles. The good news is that the Mayor’s new target to reduce traffic volumes in London by 27% by 2030 will work to reduce road casualties at the same time as improving air quality and reducing CO2 emissions.” In March 2020, TfL introduced a 20mph speed limit on all of its roads within the central London Congestion Charging zone as part of its Vision Zero commitment and 80km of its roads are now 20mph. TfL is now working to lower speeds on 220km of its roads by 2024 in inner and outer London, and recently launched 13.77km of new lower speed limit schemes in February 2022. It also published a progress report last year that outlines achievements from the past three years and commits to new tougher measures to ensure it meets its Vision Zero goal. The report was produced in partnership with London Councils and the Met, two vital stakeholders in the work to eliminate death and serious injury from London’s roads.

TfL continues to work on a number of major programmes to make London’s roads and the vehicles using them safer. TfL’s world-first Direct Vision Standard, which reduces lethal blind spots on lorries, is already helping to save lives and prevent life-changing injuries.

In addition to the record-breaking growth seen in London’s cycle network over the past five years, with 260km of safer, high-quality cycle routes delivered by TfL and the boroughs, TfL has continued to work on its Safer Junctions programme to make life-saving changes at some of the capital’s most dangerous and intimidating junctions. To date, TfL has completed work at a total of 43 junctions, with more in the pipeline.