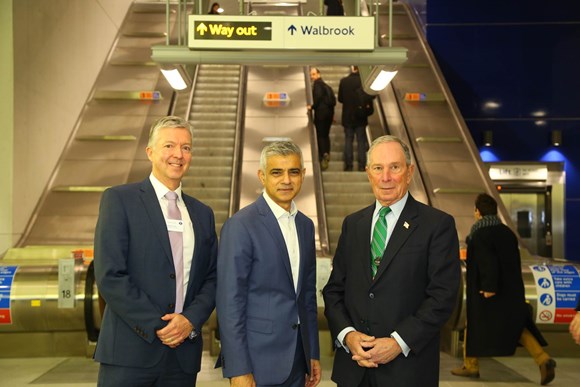 The station entrance was built by Bloomberg for Transport for London as part of the development of the company's European headquarters and fitted out by London Underground. It is the first major milestone in the Bank upgrade programme that will see the station capacity increase by 40 per cent by 2022.

Bank and Monument comprise one of the busiest interchanges on the network, used by 120 million customers a year. Demand has risen by around a quarter since 2008 and its complex network of pedestrian tunnels and escalators between the Central, Northern, District, Circle and Waterloo & City lines, as well as the DLR, regularly causes congestion and delays to customer journeys.

Waterloo & City line customers will now enjoy quicker, easier and more comfortable journeys through the station. The Walbrook entrance, only three minutes’ walk from Cannon Street mainline station, provides direct access to the Waterloo & City line and a connection to the existing concourse.

The Mayor of London, Sadiq Khan, said: “Bank is one of the busiest Tube stations in the capital so this new entrance will make a big difference in easing congestion, particularly during the morning and evening rush hours. Further improvements, including new lifts and escalators, combined with my fares freeze, will help ensure our transport network is accessible and affordable for everyone.”

Michael R. Bloomberg said: “London is our company’s second home and we are committed to doing our part to make it an even better place to live and work. This new station entrance is an investment in London’s future and a celebration of its fascinating history.”

The spacious new entrance also incorporates a display of 24 historic glass panels by celebrated glass artist and muralist John Hutton. The panels, which were commissioned in 1960 for the post-war office building on this site, reflect the ancient Roman history of the area, including the discovery of the adjacent Roman Temple of Mithras.

Chris Hayward, Planning & Transportation Chairman at the City of London Corporation, said: “It is an honour to officially open this new station entrance after working with TfL colleagues to deliver further step-free access for City commuters. Bank junction is the City of London’s busiest interchange, both underground and at street level. Therefore it is vital that we serve the needs of businesses such as Bloomberg in this iconic and forever-evolving corner of the City.”

Customers using the new entrance - which opens onto the pedestrianised Walbrook thoroughfare - will pass through a new ticket hall and gate line to use two banks of escalators (or a fixed stair) via an intermediate landing to continue down to the Waterloo & City line platforms. Two lifts also connect customers from the street to the platforms enabling those with heavy luggage and pushchairs to access the platform step-free.