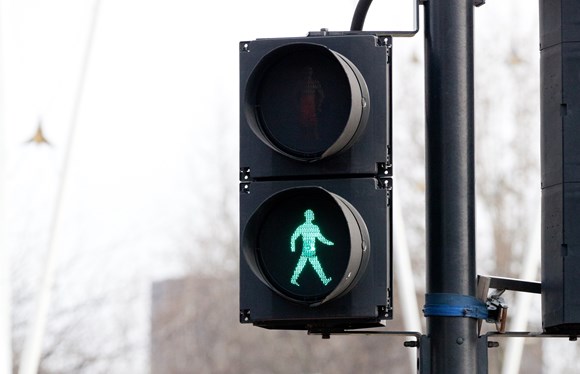 Transport for London (TfL) has published new data that shows how innovative Green Person Authority traffic signals could be used to make walking in the capital safer and easier.

In May 2021, TfL installed the new technology at 18 crossings across London. These priority signals show a continuous green signal to pedestrians until a vehicle is detected approaching the crossing. The signal then changes to red for pedestrians, allowing the vehicle to cross the junction before returning to a green signal for pedestrians.

New data from the trial suggests that the pedestrian priority signals reduced journey times for people walking and made it easier and safer for them to cross. The average location involved in the trial displayed a green pedestrian signal for an extra 56 minutes a day. By reducing the waiting time for a green signal, the total time saved by all pedestrians at the average crossing in the trial was 1.3 hours a day.

Compliance with traffic signals by people walking increased by 13 per cent, reducing the risk of a collision with a vehicle, while compliance by people driving stayed the same. The data also shows that the signals had virtually no impact on traffic, with only minimal changes to journey times for buses and general traffic – the largest increase for buses was only 9 seconds and for general traffic only 11 seconds. Several sites showed improvements in journey times.

Boosting safety for people walking is crucial in delivering TfL and the Mayor’s Vision Zero commitment to eliminate deaths and serious injuries from London’s roads. It is also vital in enabling more people to walk and cycle across London, ensuring a healthy and sustainable recovery from the pandemic.

Following the results of the trial, TfL is assessing how the technology could be further improved and used at other locations across London in the future. Funding for further sites across the capital would be dependent on agreeing a long-term funding deal with the Government. The technique could be used elsewhere in the UK and TfL will engage with local authorities to see how pedestrian priority could benefit other towns and cities.

Will Norman, London’s Walking & Cycling Commissioner, said: “Walking is one of the best ways to get around London. It’s green, it’s clean, it’s healthy and it is great way to enjoy your local neighbourhood. Making our streets safer is key to enabling more people to switch more trips from cars to walking. I’m delighted that this innovative new technology is making pedestrian crossings safer and more convenient for people walking. I look forward to seeing how it can be rolled out to benefit other locations soon.

Glynn Barton, TfL’s Director of Network Management, said: “We’re determined to keep people on London’s roads moving as safely, sustainably and efficiently as possible, so it’s brilliant to see the positive results of this trial. This new technology could provide us with another vital tool which we can use to make walking a natural choice for more journeys, reducing congestion and road danger and improving air quality for everyone.”

Stephen Edwards, interim Chief Executive at Living Streets, said: "This initiative to switch to a default green person gives power back to pedestrians, helping them move around more easily, safely and quickly. As these trial results show, they have the potential to make our streets safer and make walking and wheeling around the city a more attractive option."

TfL data* from last year showed that 31 per cent of Londoners say they are walking to places where they used to travel by a different mode of transport, and 57 per cent say they now go on more walks for exercise or walk for longer than they did before.

TfL is determined to eliminate deaths and serious injuries from London’s roads. TfL’s Vision Zero commitment has led to lower speeds being introduced on roads across the capital, improved infrastructure for walking and cycling and the delivery of the world-leading Direct Vision Standard to improve the safety of heavy goods vehicles.

TfL remains committed to ensuring the safety of all road users. Future safety schemes such as walking and cycling improvements and changes to signals may be dependent on the ongoing discussions with Government for long-term sustained investment in London, which is required to avoid the managed decline of the transport network.