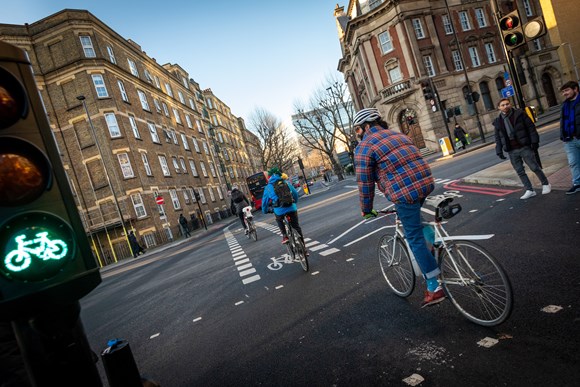 New data from Transport for London (TfL) and UK cycling retailer Halfords has revealed record increases in the number of people cycling in London, with an increase of more than 200 per cent on some weekends, while survey data from Halfords suggests bike owners are cycling more often and feel safer on the roads.

TfL and Halfords launched a partnership last November to enable safer cycling through better training and safety equipment. Since then, more than 12,000 people have registered for TfL’s free online Cycle Skills course. Everyone who completed the course received 15 per cent off Halfords own brand cycle locks, lights and helmets, encouraging uptake. In addition to the free online Cycle Skills course, face-to-face cycle training across London’s boroughs restarted in March, making it even easier for people to learn the skills they need to cycle safely.

Despite fewer journeys being made during the pandemic, cycling numbers continueto be significantly above the long-term average at weekends, with a 68 per cent increase across 29 - 30 May compared to the baseline year. One weekend (26-28 February 2021) saw an increase of 240 per cent compared to the same weekend in 2020. Santander Cycles hires have also been strong in recent weeks, with 150,000 hires across the bank holiday weekend of 29 – 31 May, and more than 53,000 hires on Monday 31 May – the highest of any day so far this year and this week is expected to be one of the busiest in the scheme’s history. Heidi Alexander, Deputy Mayor for Transport, said: “Seeing more people out on bikes over the last year has been one of the few good things to have happened as a result of the pandemic. This partnership between TfL and Halfords is helping to ensure people have the skills they need to cycle around the capital with confidence, and the right equipment to keep them and their bikes safe. We continue to work with boroughs to make our roads safer for all road users, and I hope this year’s Bike Week inspires even more people to do some training and give cycling a go.”

Julie Dixon, TfL’s Head of Customer Information, Design and Partnerships, said: “Cycling has been a lifeline for people across London during the coronavirus pandemic and it’s vital that everybody who wants to cycle is able to feel confident when doing so. That’s why we’re working closely with London’s boroughs and companies such as Halfords to encourage more people to access high-quality cycle training, and it’s fantastic to see thousands of people taking part in our free online Cycle Skills course.”

Sarah Filippardos, Head of Cycling at Halfords, said: “We have been delighted with the success of our partnership with TfL, supporting our joint mission to get more Londoners cycling. Thousands more people have brushed up on their cycling skills and our discount means they can get the accessories they need to cycle safely and make their bike secure when travelling around the capital.

"62 per cent of bike owning Londoners we surveyed said they’d cycled more than usual over the past 12 months, and a majority plan to use their bikes more post-pandemic.

“At Halfords we want to play our part in ensuring the bike boom is here to stay, as a safe, healthy and greener way to travel.  Our campaign with TfL, alongside initiatives such as Halfords free 32-point bike check, aims to do just that.”

Sarah Mitchell, Cycling UK’s chief executive, said: “It's really encouraging to see these figures on the rise in cycling in London recently and with summer on its way, now is definitely a great time to be riding more.

"To help make sure bikes are safe to ride, Cycling UK's Big Bike Revival will be happening across the capital and the rest of England. Working with our partners we’ll be on hand this summer to fix old or neglected bikes, teach basic maintenance skills and run led group rides to boost your confidence in the saddle."

Road safety teams across the capital have been organising cycling events this week as part of Bike Week, an annual celebration of cycling delivered by Cycling UK. Events have been taking place across London including in Brent, Hounslow, Greenwich and Waltham Forest with some events taking place on Saturday 5 June.*

Tragically six people cycling have died in collisions this year. TfL is committed to its Vision Zero goal of eliminating death and serious injury from the transport network and is working closely with councils across the capital to build the infrastructure needed for people to cycle safely. More than 100km of safer cycle routes have been delivered since the start of the coronavirus pandemic, while 25 of the capital’s most dangerous and intimidating junctions have been transformed over the past five years with the changes resulting in an average 46 per cent reduction in collisions with people cycling at these locations.

The changes have also resulted in huge increases in cycling on many routes:

In addition, TfL is rolling out 20mph speed limits on TfL roads and encouraging safer driving through campaigns and education programmes.

TfL’s world-first Direct Vision Standard lorry safety scheme is another part of the Vision Zero goal, now in operation 24/7 across all the capital’s roads. In order to operate in London, vehicles over 12 tonnes must have a free DVS permit which assigns a star rating from zero (poor) to five (excellent) based on how much the driver can see directly through their cab windows. All zero-star vehicles are now banned unless a series of Safe System measures have been installed. This will save lives and improve road safety by reducing lethal HGV blind spots.

To date, more than 136,000 permits have been issued, including more than 4,000 to5-star vehicles, which provide the highest levels of direct vision. Around 70,000 0-star HGVs have now had safe systems fitted, improving protection for people walking, cycling or riding e-scooters or motorcycles and saving lives.