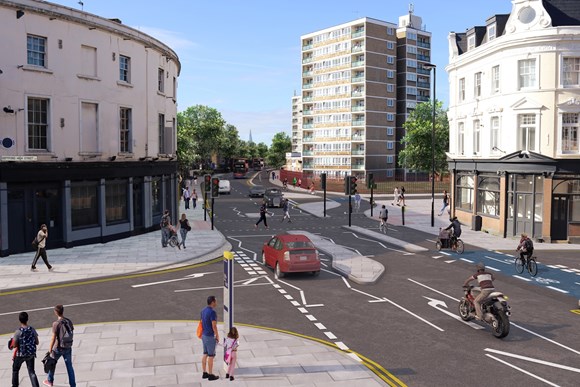 Construction work on Cycleway 4, a major new cycle route between Tower Bridge and Greenwich, reaches a significant milestone next week as construction work begins on Creek Road in Deptford ahead of schedule.

The new segregated cycle route will enable thousands more people to make everyday journeys by bike, with new pedestrian crossings set to make the area much easier to get around for people walking.

Construction of the new route began on Jamaica Road in Bermondsey in July. Work on these first sections of the route, including a complete overhaul of Rotherhithe roundabout and almost 4km of segregated Cycleway along Tooley Street and Jamaica Road, is set to be complete by spring next year. In August, TfL announced that London’s cycle hire scheme, Santander Cycles, is set to be expanded along the new route between Tooley Street and Canada Water station. New docking stations along the route will make it even easier for people to start cycling in south east London and will be the first time that the scheme has reached Bermondsey and Rotherhithe.

Nick Fairholme, TfL’s Director of Project and Programme Delivery, said: “We’re making good progress with construction work on Cycleway 4 and I’m pleased that work will now be starting on Creek Road. I’d like to thank everybody in the area for their patience during construction work and ask people to plan ahead and allow more time for their journeys.”

Cllr Richard Livingstone, Cabinet Member for Environment, Transport and the Climate Emergency for Southwark Council, said: “We welcome the extension of Santander Cycles further into Bermondsey and on into Rotherhithe. We have worked with TfL to bring these bikes to more of Southwark and hope that they will encourage even more people to take to the road on two wheels.

“In addition to this, the brand new section of Cycleway 4 will open up miles of segregated highway across Southwark. I hope that this will make cyclists feel safer, tackle congestion and help people to make choices that reduce air pollution in the area.”

During construction, there may be delays to drivers travelling on the A200 Creek Road, Tooley Street and Jamaica Road. There may also be delays approaching Rotherhithe roundabout from the A101 Rotherhithe Tunnel, and from the A200 Lower Road. Buses serving the area may also experience some delays during works. For a quicker and easier journey, people should use an alternative route or travel outside peak periods. Otherwise people travelling in the area should allow more time for their journey. Cycleway 4 is one a number of new cycle routes which are either under construction or in development across the capital. Construction work on a new Cycleway between Acton and Wood Lane is set to be complete by early 2020, with construction work on another major new route between Brentford and Olympia set to begin in December. TfL has recently asked people to have their say on proposals for other major new routes between Hackney and the Isle of Dogs, Ilford and Barking Riverside, and Lea Bridge and Dalston.